We’re glad to announce that starting from today our Unclutter team separates from Software Ambience and becomes a brand new company, entirely devoted to the Unclutter app, while we stay better focused on our main DaisyDisk and LilyView projects. This is a move that we’ve been planning from the very beginning of Unclutter, which we see as a great idea, but still a side product for us.

We’ve been sharing our vision and expertise with the Unclutter team under the wing of Software Amibence and today we are happy to see that the app has grown strong enough to fly on its own.

From the very beginning, Eugene was and remains in charge for developing Unclutter. The website and all contacts for Unclutter stay the same. We remain friends and wish the Unclutter team the best of luck!

Unclutter has become a great tool already and we’re looking forward to the upcoming next major update which will make it even greater. We use this indispensible tool ourselves every day, and recommend it to all Mac users.

Better news: the upcoming DaisyDisk 4 will be a Yosemite exclusive with an updated look and feel plus some really handy extra features.

Great news: DaisyDisk 4 is free for all users of DaisyDisk 2 and 3.
Availability: December 2014. 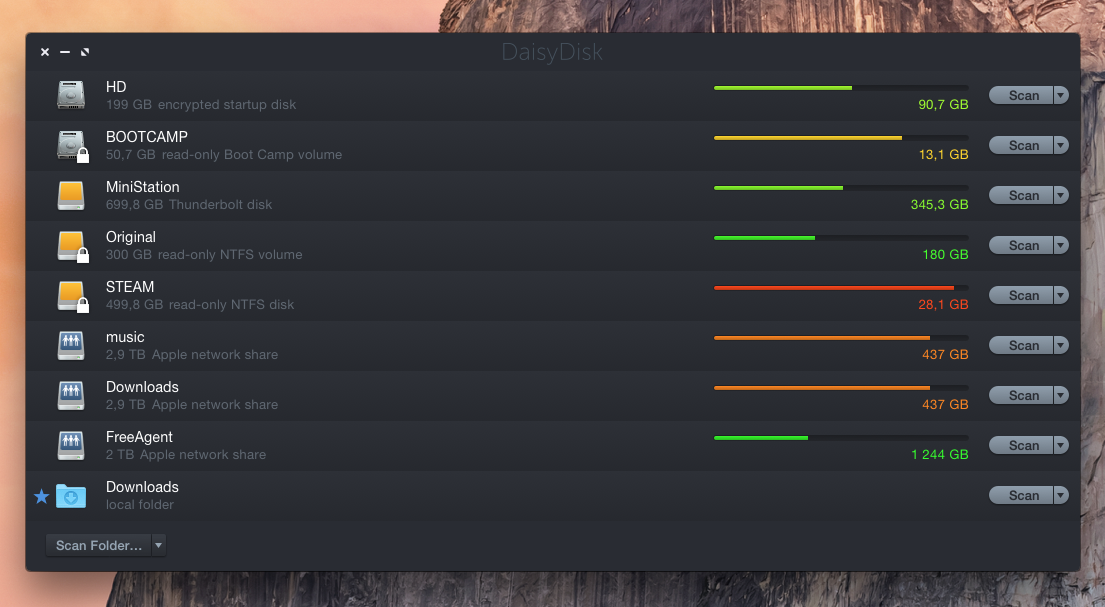 Unfortunately, LilyView hasn’t been updated in time. It’s only partially compatible with OS X 10.10 Yosemite and these issues really influence the experience of using the app.

We apologize for the inconvenience and let you know that the update is in the works. Meanwhile we decided to temporarily pull LilyView from the Mac App Store. It will be back after the update is released.

It adds a workaround for yet-another-Mavericks-bug (sorry for inconvenience) and speaks German, French, Italian, Russian and Swedish.

Download, enjoy and let us know what you think.

Since its very introduction in OS X, app sandboxing has been a pain in the butt for both developers and users. Developers have spent wonderful weeks or even months adopting their software to the new requirements, and users have surely loved the new for-the-sake-of-your-own-security dialogs.

While no doubt being a good idea in theory, Apple’s sandbox implementation leaves much do be desired, not to mention it’s ridden with bugs, which really hurt end users’ experience.

For example, sandboxed applications cannot unmount USB drives even after receiving full access. The bug has been reported to Apple months ago, but it’s still there in Mavericks. A new issue introduced in Mavericks is app’s inability to operate correctly if the sandbox access is granted by drag and drop. The open dialog works, but drag and drop, Mac’s natural way of interacting with things, doesn’t work correctly in Mavericks.

We, as developers, cannot fix sandbox bugs, but we can do one thing: offer all our customers a sandbox-free version of DaisyDisk, which solves all these problems once and for all. Just download DaisyDisk app directly from our site and it will pick up your Mac App Store registration data. In addition to being sandbox-free, the stand-alone version provides some extra features you may find useful.

Since the release of DaisyDisk 3 many Mac App Store users complained about lost functionality and inability to scan the disks as they’re used to be. Here’s a short explanation about what’s going on and what we’re doing about this.

As you may already know, some time ago Apple introduced app sandboxing as an extra security measure. In theory, isolating applications prevents hackers from getting your private data or ruining your system, but in practice it has certain drawbacks for both users and developers. The main problem is that from now on all Mac App Store apps are isolated and can’t access most locations on your Mac without clearly receiving your permission. This permission can be provided through the familiar Open panel or by dragging and dropping a file, folder or disk to the app’s main window.

So, what could we do?

The easiest way to apply sandboxing could have been turning the app into a manually populated drop area where in order to view the disk’s capacity or even name one would have to add it first. For many it’s a solution, not for us.

Our problem is that we haven’t spent enough time on current implementation (it’s been finished in a rush) and haven’t tested it too good on real-world cases, so the result is quite confusing. The release version of DaisyDisk 3 is the 4th major iteration of the design, 3 previous ones have been rejected during review process and in fact we’ve spent much more time on app sandbox than we’d liked (we tried at least ten different versions of the UI): 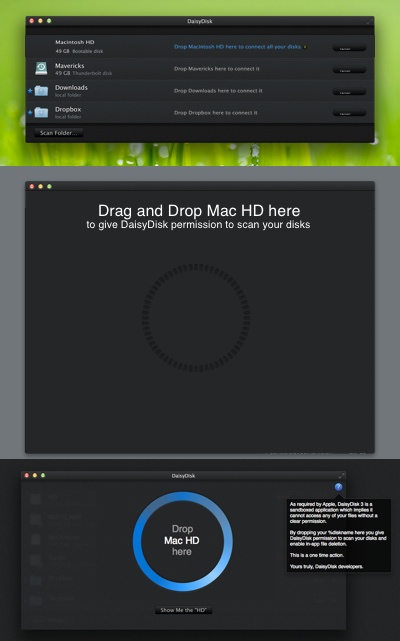 Some of the early sandbox UI prototypes

Future updates will likely see even better design. What’s important is a fact that we cannot magically make all your disks just scan as before: DaisyDisk simply doesn’t have permission to access your disks. That’s the face we have to deal with, but we’ll do our best to make the upgrade experience as smooth as possible.

What can you do right now? Drag and drop Macintosh HD to the DaisyDisk’s window to let the app scan all your disks and, if you ask it to, delete files. This is a one time action. Alternatively download and run DaisyDisk version from our site. It can work alongside with the one from Mac App Store, it’s not sandboxed and has more features which cannot be included into the Mac App Store edition. If you installed DaisyDisk 3 from the Mac App Store, standalone version will pick up registration information automatically, so you’ll always have all the features without paying extra, no matter where you purchased the application.

Thanks for your patience.

Getting ready for Mavericks

Winter is coming… which means a new version of OS X is nearing its release date.
Here are a few tips on helping you get ready for the upcoming OS X 10.9 Mavericks.

Mavericks doesn’t contain any radical changes in API, so most of your apps will likely work as before. Nevertheless we recommend checking if all of your applications are up to date. This is especially important for ones you purchased outside of the Mac App Store as some apps use undocumented APIs that could break after you upgrade your OS X. Good news: once you install Mavericks, it will keep your Mac App Store apps up to date automatically.

Run Disk Utility and ensure all your disks are in good health (Verify Disk command) and permissions are fixed. Damaged file system may cause enough trouble even if you’re using Time Machine backups (and you do, right? ;)). If necessary, use free Onyx app for basic maintenance, but stay away from any sorts of fine-tuners, tweakers and other MessUpMyMac tools unless you’re looking for troubles.

Clean up a bit. While you don’t need hundreds of gigabytes for updating to OS X 10.9 having some extra disk space never hurts and DaisyDisk is your best friend here. So why not use the chance and get rid of the junk on your disks?

DaisyDisk is ready for Mavericks, are you?

Greetings!
We’re glad to inform you that DaisyDisk 3 has finally been released.
Both Mac App Store and standalone version users, check for updates and get a newer, better and Retina friendly version of the app. It is a free update for all DaisyDisk 2 users, so there’re no reasons to skip it.

Download, enjoy and let us know what you think.

It’s been a long time.
How have you been?

Greetings, DaisyDisk users.
It’s been a quiet summer, but we still have some news to share.

First of all, DaisyDisk 3 is slowly but surely approaching the release date.

The good news is that you can try the beta today and see what we’ve been working on during the past months. The beta will be updated until the final version is available. Better news: DaisyDisk 3 will be free for all DaisyDisk 2 users. It will be available in both Mac App Store and standalone edition and as usual we’ll offer free migration to standalone. 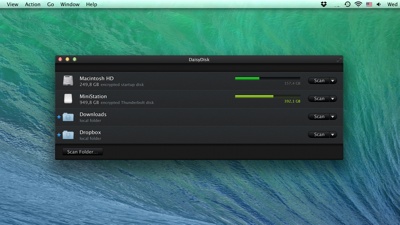 The list of changes includes a brand new design, full retina display support, a new engine and a huge amount of smaller, but useful features, updates and tweaks.

Once again, if you’re running OS X 10.7 or newer, there’re no reasons for not trying the beta of DaisyDisk 3, so get it right now. 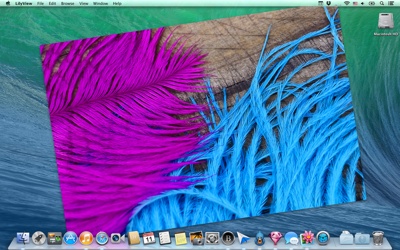 Our new app, lightweight image viewer LilyView  is out of beta and is available to every Mac user running OS X 10.7+. Try the demo or head straight to the Mac App Store.

My sincere apologies for being silent during the last months. There’s been quite a lot of work inside the company, but only a minor part of it is visible.

DaisyDisk Team is gone. Long live Software Ambience! It’s a company responsible for DaisyDisk and all our upcoming products. The staff has expanded, so we’ll be able to work on multiple products simultaneously.

Welcome Unclutter, a tiny utility that combines file storage, instant notepad and clipboard preview. Immediately accessible with a simple gesture or keystroke. Available right now on the Mac App Store near you.

DaisyDisk is alive and kicking. It got a brand new design with full retina display support, an improved future-proof engine and other interesting features you’ll soon be able to test yourself. This update will be freely available to all existing users of DaisyDisk in Q1 2013. Be patient, it’s worth the wait.

That’s not all. Our third app, @LilyViewapp is nearing open beta.

Sounds interesting? Stay tuned and follow us on Twitter. The year of 2013 is going to be really great for us all.

2011 has been a great year for the team and the product. We’ve released DaisyDisk 2.0, a rewritten and redesigned version of the app, featuring tons of improvements and some unique features. We’ve rolled out 4 updates that made the app look even better, work faster and speak with our customers in their native language.

No wonder DaisyDisk 2 is featured in the Best of Mac App Store 2011 category of the Mac App Store and is a runner up in TUAW Best of 2011, the best Mac utility app vote. Not to mention lots of positive reviews and, most importantly, our users’ satisfaction.

Right now DaisyDisk sells with 50% discount and the good news is that we’re leaving it that way. That’s right: a fantastic, state of the art tool for less than $10. That includes free customer support and nonrestrictive licensing policy.

What’s next? We have a long, long list of possible improvements, features and just crazy ideas, so the development is not going to stall. We’re not fans of abandonware :) At the same time, we’ll try to move on with one on our next projects that have been frozen throughout the year.

Have great holidays, see you in 2012. Stay tuned.
Yours truly, DaisyDisk Team.